My Life as a Robot in an Hybrid workshop 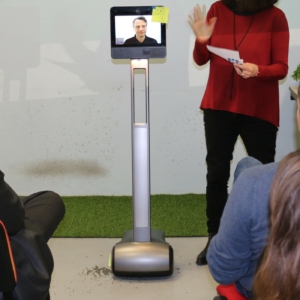 I was a robot during 3 hours. No legs, just wheels. No face, just a screen. No eyes, just a camera. No arms, unfortunately.

I was participating in a workshop with colleagues from Schneider Electric at an innovation lab at the Grenoble University, France. I had to leave back to Paris after the second day and was very sad not be able to participate the last day.

I found the solution in a corner of the room: a telepresence robot from Suitable Technologies, which would replace me.

The morning of the last day, from home, I logged into the web site of the vendor, installed the controlling software on my PC, viewed the instructions on a video, selected the Beam+ robot located in the room and voilà, I was among my colleagues. I pressed the arrow keys and began to walk, so to say. I was thrilled. I was able to wander around the room, joke with them, as if I were physically there. 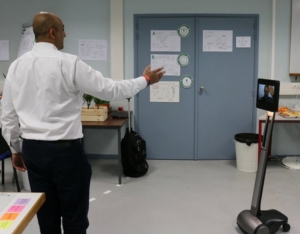 I always wanted to incarnate such a robot. I had seen some in trade shows, in Dilbert comics, or on the web. I had assumed that the typical robot user was a teleworker wandering in the empty corridors of his/her office, looking for someone to talk to. I am teleworking one day per week, and the mix of WebEx, webcam and teleconference is good enough for me. Though, attending a workshop where the people separate in sub-groups, brainstorm, and then gather, just from a PC, looked impossible! 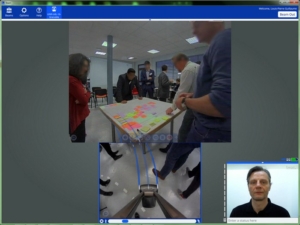 Participating to the workshop was easy when I was among a sub-group of three people. Brainstorming was easy, reading paperboard was fine, providing the text was not too high (I shrunk from 1.88m to 1.35m!). Writing was frustratingly impossible, so was reading post-its on a table. Attending the plenary and speaking in front of the assembly were easy. However, understanding someone when there was a lot of background noises was very difficult.

My colleagues accepted me very easily. They discussed with me, face to face, or in groups, and pushed chairs to facilitate my moves. They even took selfies. 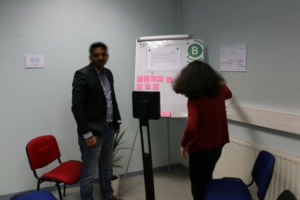 At the end of the morning, I began to panic. The battery indicator was getting red and I did not want to leave the group to recharge. I wanted to stay until the end of the presentations. I felt the same way as someone seeing the gauge of his car getting to zero, knowing that he is not sure to reach his destination. I was telling the team that I (the robot) was getting flat, without great success.

Hopefully, I managed to stay alive until the end. The last drop of energy allowed me to survive until three quarters of the wrap-up. Finally, black screen. What an adventure!

Want to join the discussion?
Feel free to contribute!

We may request cookies to be set on your device. We use cookies to let us know when you visit our websites, how you interact with us, to enrich your user experience, and to customize your relationship with our website.

Click on the different category headings to find out more. You can also change some of your preferences. Note that blocking some types of cookies may impact your experience on our websites and the services we are able to offer.

These cookies are strictly necessary to provide you with services available through our website and to use some of its features.

Because these cookies are strictly necessary to deliver the website, refusing them will have impact how our site functions. You always can block or delete cookies by changing your browser settings and force blocking all cookies on this website. But this will always prompt you to accept/refuse cookies when revisiting our site.

We fully respect if you want to refuse cookies but to avoid asking you again and again kindly allow us to store a cookie for that. You are free to opt out any time or opt in for other cookies to get a better experience. If you refuse cookies we will remove all set cookies in our domain.

We provide you with a list of stored cookies on your computer in our domain so you can check what we stored. Due to security reasons we are not able to show or modify cookies from other domains. You can check these in your browser security settings.

These cookies collect information that is used either in aggregate form to help us understand how our website is being used or how effective our marketing campaigns are, or to help us customize our website and application for you in order to enhance your experience.

If you do not want that we track your visit to our site you can disable tracking in your browser here:

We also use different external services like Google Webfonts, Google Maps, and external Video providers. Since these providers may collect personal data like your IP address we allow you to block them here. Please be aware that this might heavily reduce the functionality and appearance of our site. Changes will take effect once you reload the page.

The following cookies are also needed - You can choose if you want to allow them: